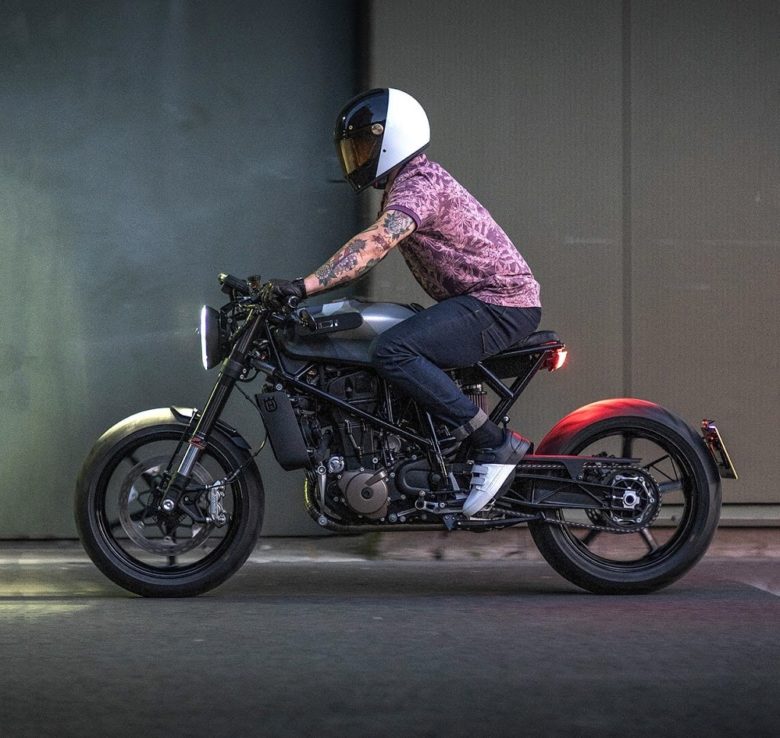 13 SHADES OF GREY BY IRONWOOD

The Husqvarna VITPILEN 701 is an immaculately designed street bike that offers a new perspective on urban motorcycling. Driven by a powerful single-cylinder engine, this compact and agile motorcycle is expertly crafted to deliver minimalist styling with exceptional performance and reduced to the bare essence of what a motorcycle should be. Created to suit the unique, progressive lifestyle of modern motorcycling, it delivers a more thrilling, honest and real bike experience.

About the Ironwood Customs

Nice to meet, ”Bold & Minimalistic” at the same time, we are Ironwood! IWC Motorcycles is a Dutch custom garage founded by Arjan van den Boom & Partner in 2012. Together we customize, conceptualize & realize motorcycles to one-of-a-kind vintage machines, piece by piece! Let’s start first with; we are crazy about bikes, pretty much all of them as noticed on first glance but our hearts will skip a beat when seeing properly manufactured cafe racers around the globe.
The actual journey of taking on the build, tear down the bikes to its bare bones and rebuild them from the ground up provides us that all-time high. Our L-O-V-E for custom motorcycles is no secret so every project we handcraft will have its own specific details and key features to tell its own story.  Throughout the process of building, we mostly envision our bikes as mean and fast ”bratstyle” or ”bobber” rides with a few touches from the industrial universe of the 20th century. 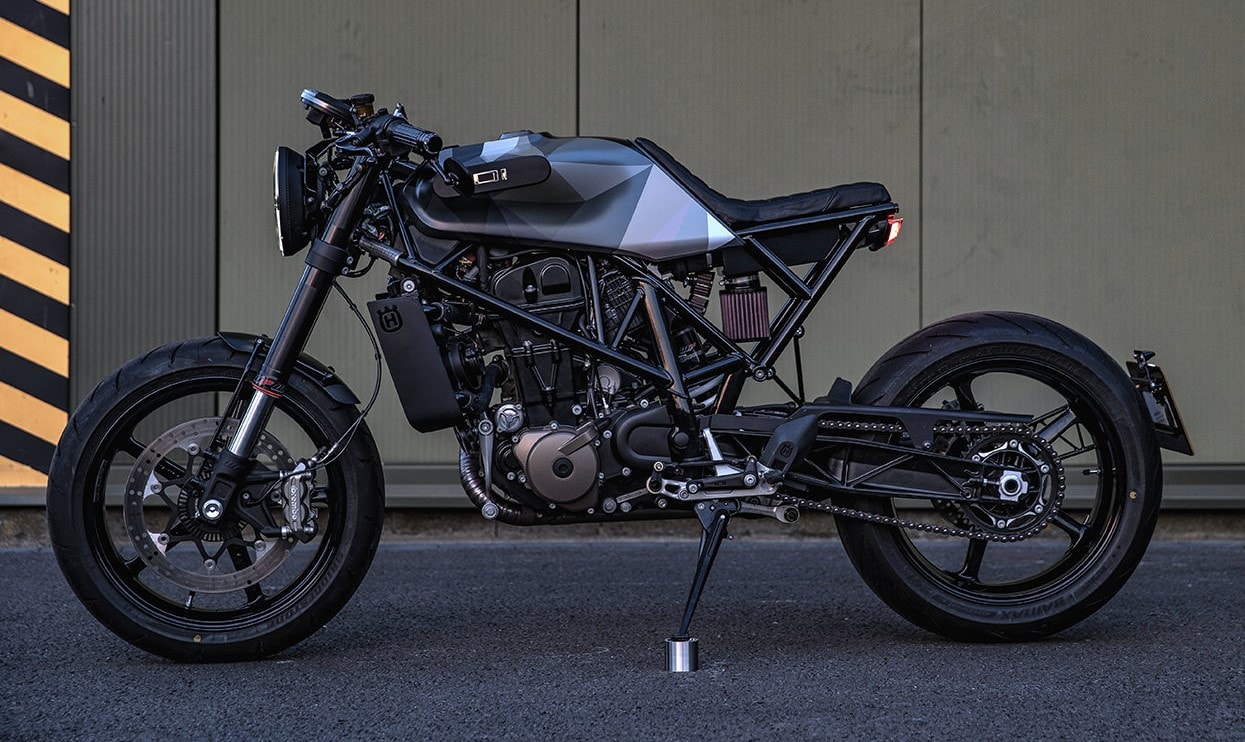 We constantly have new ideas shuffling in our heads and when it comes to finding the perfect tailored solution for each assignment, we will be challenged by conventional concepts blended with innovative defiance.
We achieve to deliver a work of art on every vintage machine, turning scrappy metal into gold! Each bike has it’s own unique design and character, depending on budgets involved.
We perform semi projects, full rebuilds, build to sell and modify customer motorcycles into killer bikes!
We like to be different and get the most out of life. Our vision is to apply a mix of creativity. Some vintage, some with a modern twist. 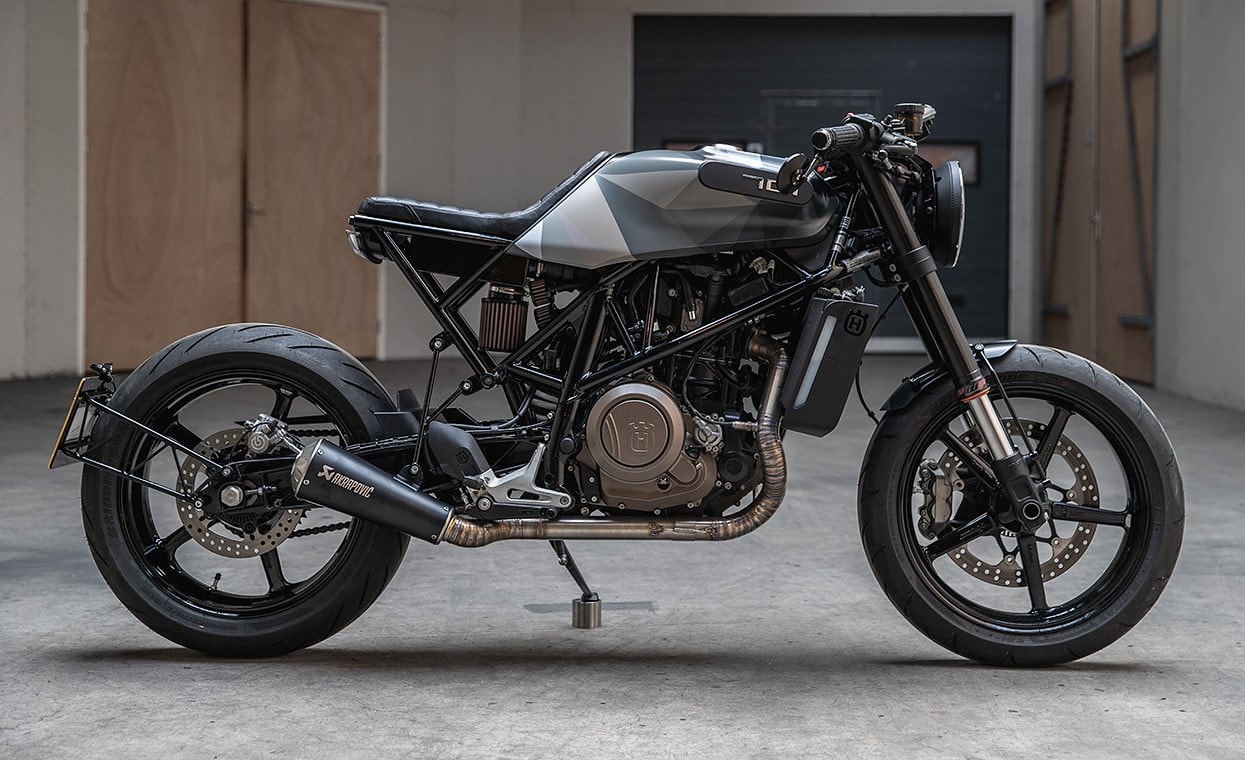 The Dutch, Ironwood Custom Motorcycles has modified this HUSQVARNA VITPILEN 701, and we’re loving the results.
“After seeing the Vitpilen concept at European events, I was intrigued to ride it,” says shop boss Arjan van den Boom. “Or even better, customize it—although it looks so good and balanced already. Luckily for us, a London customer reached out to have his new 701 model.”
Ironwood’s custom Husqvarna isn’t a complete re-imagining of the single-cylinder neo-café racer. Instead, it’s a stealthy nip and tuck job—a collection of clever tweaks and delicate changes. that is strictly what their client asked for. 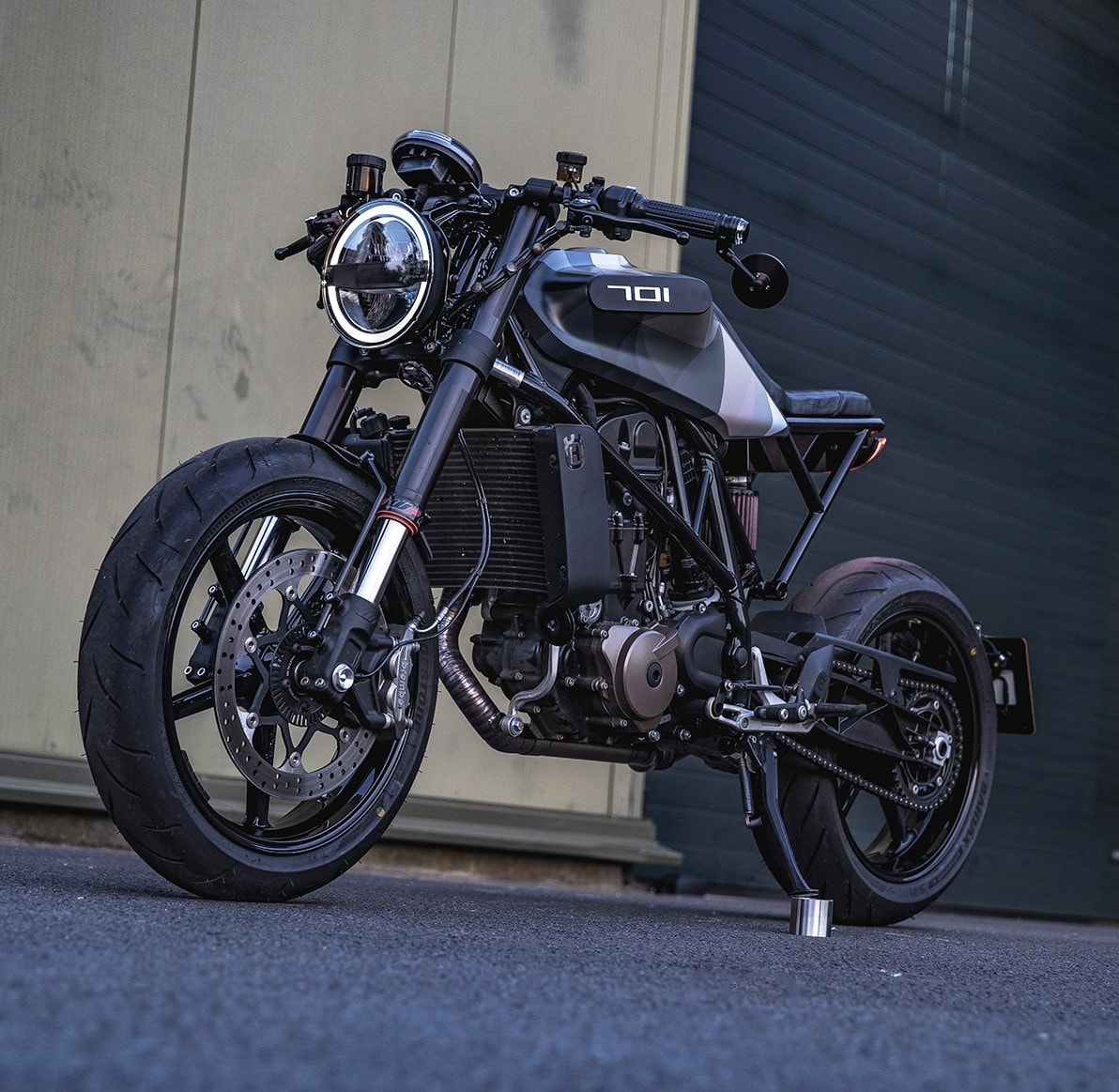 “Overall it had to be recognizable as a 701,” says Arjan, “but we had to make it mean and edgy. Keep the key features like the tank with the humps, OEM wheels, speedo, and lighting. But change the lines, and make it unique.”

The biggest modification is going on the outback. The Vitpilen 701 is already compact, however, Ironwood has shortened the backside even more. 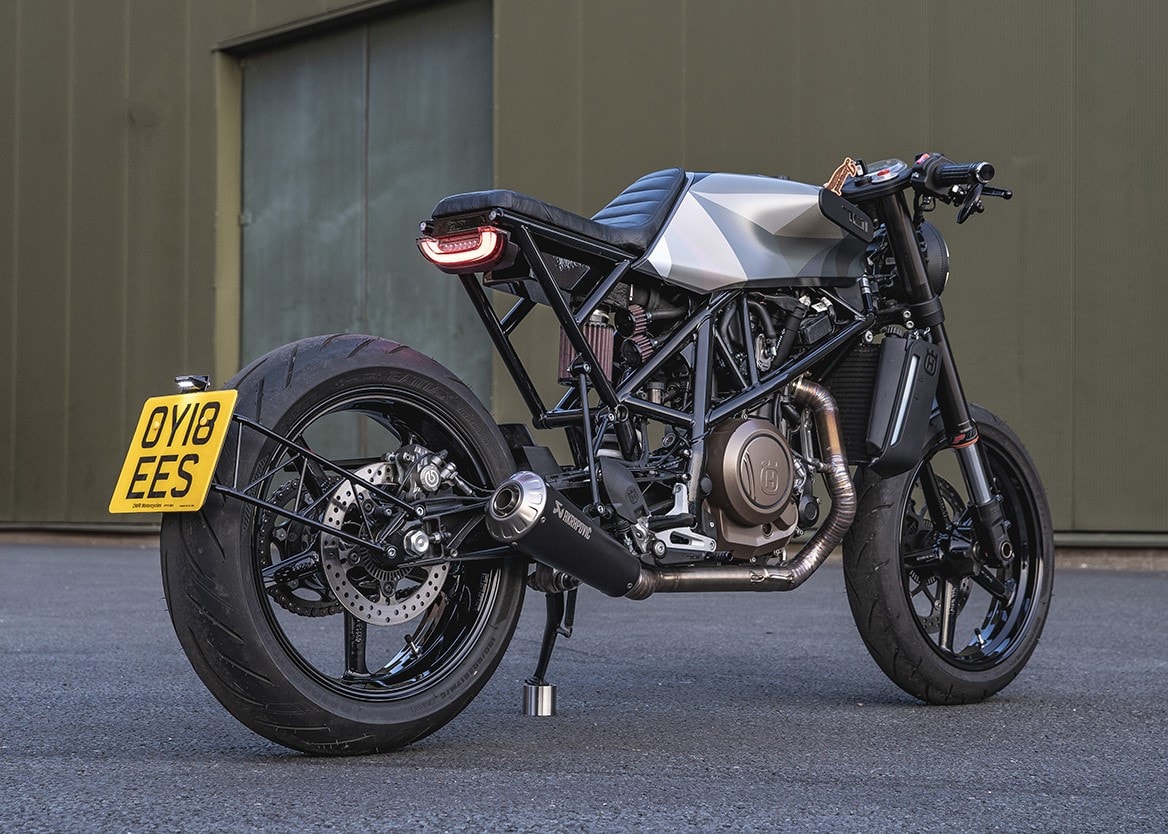 Arjan’s friend, Marcel van der Stelt of The Custom factory, jumped in here. Marcel fabricated the new subframe, and a tray under the seat to hold the wiring and battery. 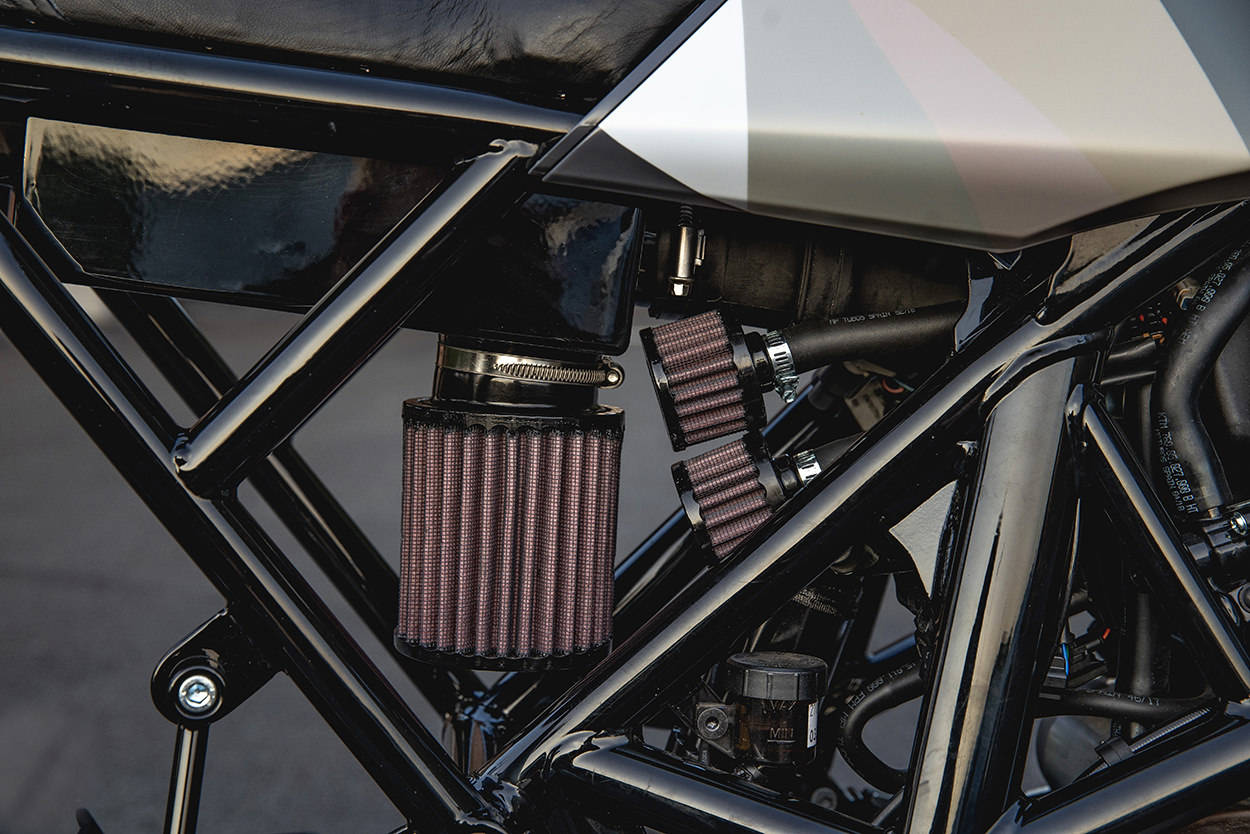 “It took some effort to get the big wire cluster trimmed down visually,” says Arjan, “because after removing some ugly covers it looked like spaghetti. Most of the wiring loom we kept original, along with the stock battery, which was small and powerful enough already.” 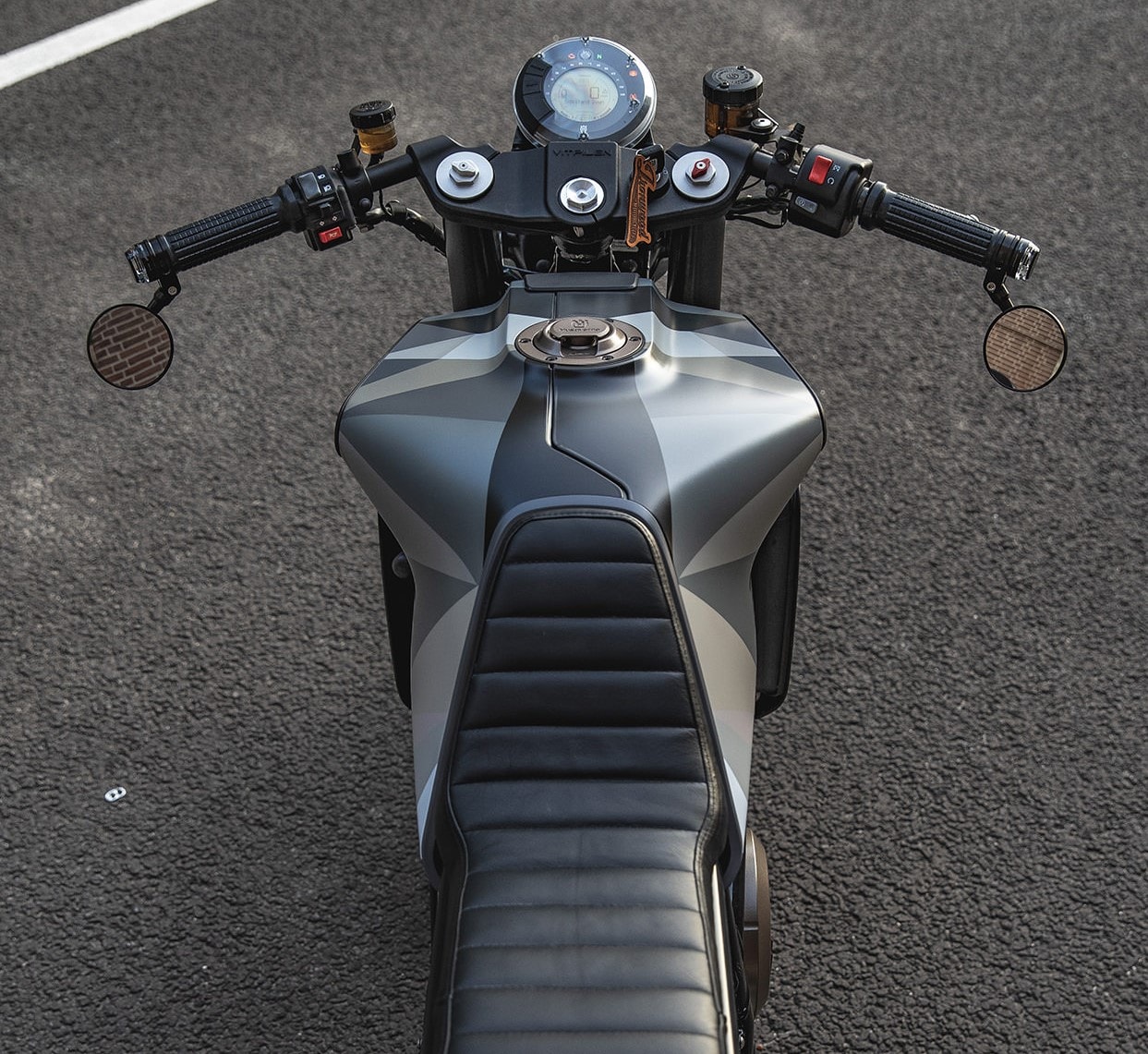 There are abundant subtle trims. Both the headlight and the speedo are still in play, but the latter has always been slightly repositioned. The bars and controls are original, but Ironwood has added Motogadget grips, mirrors, and turn signals. At the bottom, the team removed the Vitpilen701’s belly pan and rebuilt the whole exhaust header. It ends in an Akrapovič muffler, originally made for the smaller Vitpilen 401 Husqvarna. 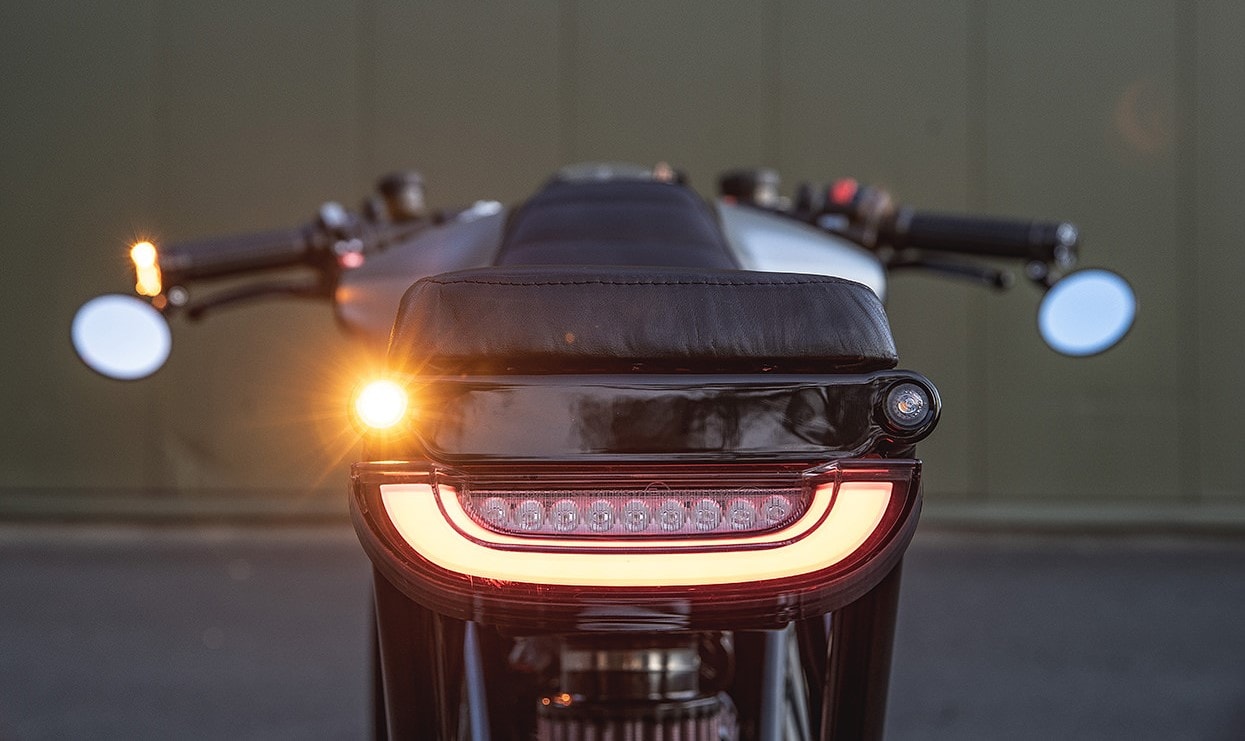 Up top is a custom seat upholstered in leather by Patricia, Marcel’s wife. The crew embedded a pair of LEDs (turn signals) in the ends of the frame and mounted the OEM taillight again. There’s also some clean-up work going on. The plastic back fender and plate holder combo of the 701 has been replaced by a much slimmer custom unit. Equally considered, there is a stubby front fender and a nice set of brackets to replace the originals.

The intake has also been changed and is now fed through a chunky DNA air filter. It’s a tricky design, with the filter actually mounted on the bottom and the intake via the electronics tray. Arjan reports that switching the can and intake had no negative impact on the performance of the 701. 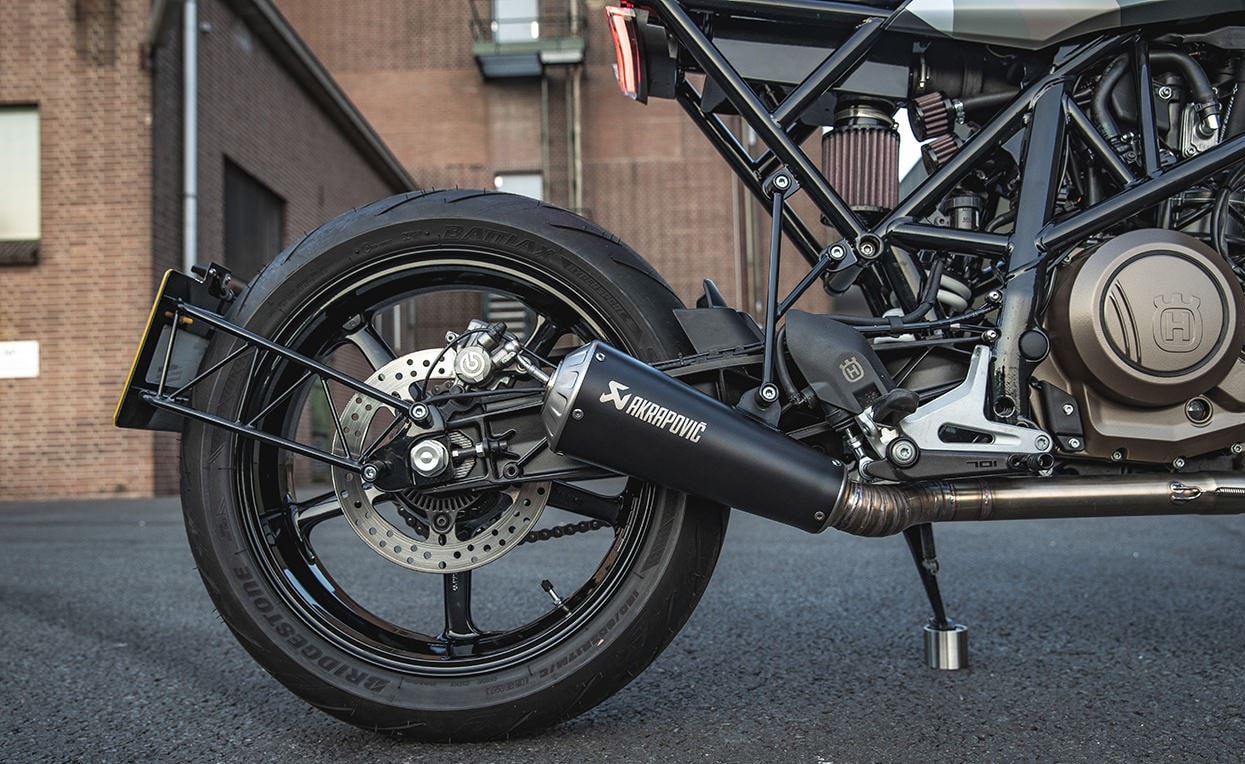 A final visual hit comes from the 701’s striking new tank graphics. “For the tank design, we collaborated with Lisa from Dutch On Wheels,” Arjan told. “We’ve known each other for some years, but never worked together on a project.”

“She has a great eye for detail and thinks out of the box on her design, so I was thrilled when my customer asked me to involve a skilled artist for the paint job. It has 13 shades of grey, and resembles a stealth look, like on old war boats.” 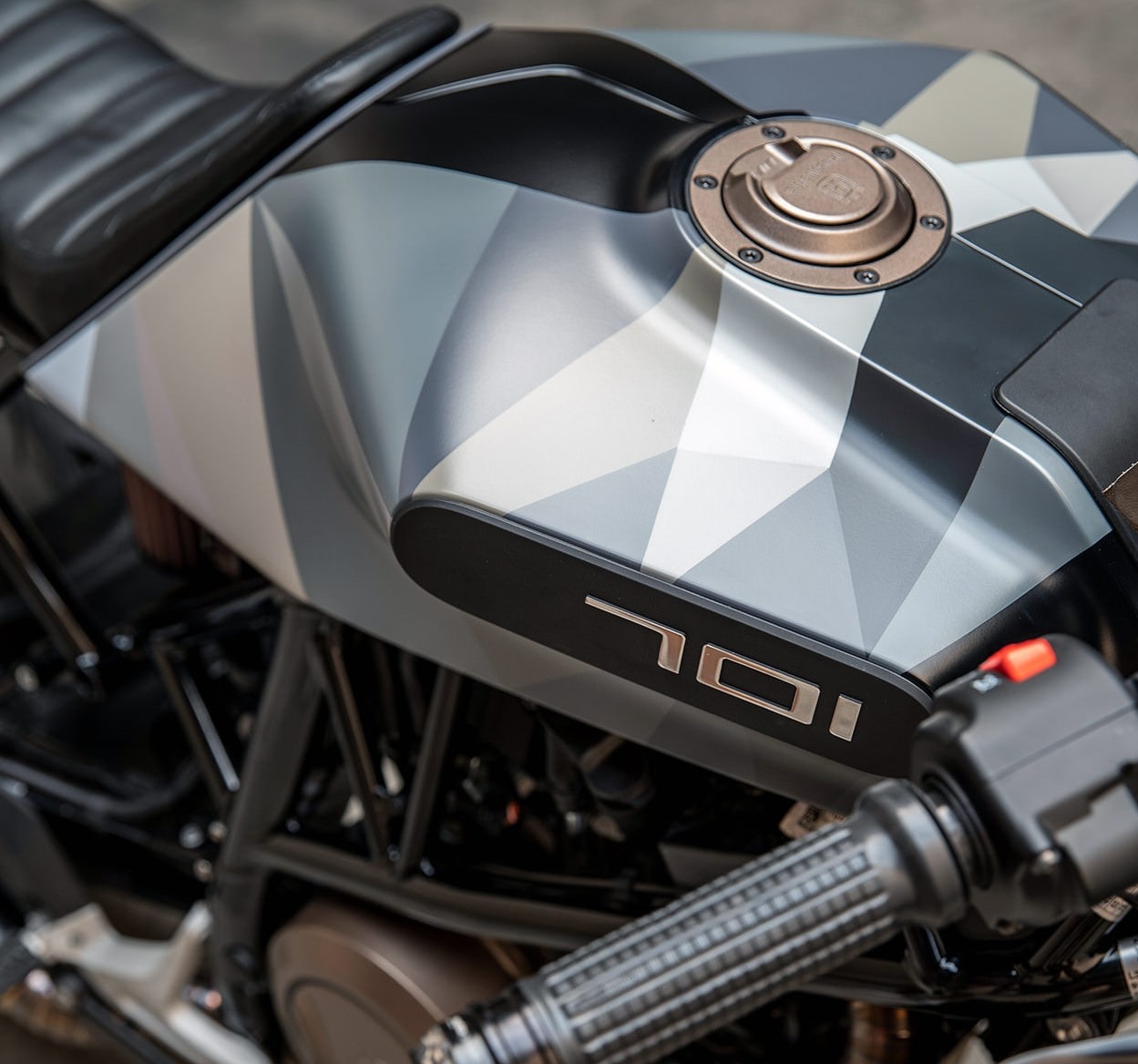 Ironwood is calling this Vitpilen a ‘neo-classic jet fighter,’ and have dubbed it ‘The Chain Smoker.’ Arjan told it also perfectly represents Ironwood’s ‘ABCD’ ethos: Aggressive, Bold, Clean and Dazzling. 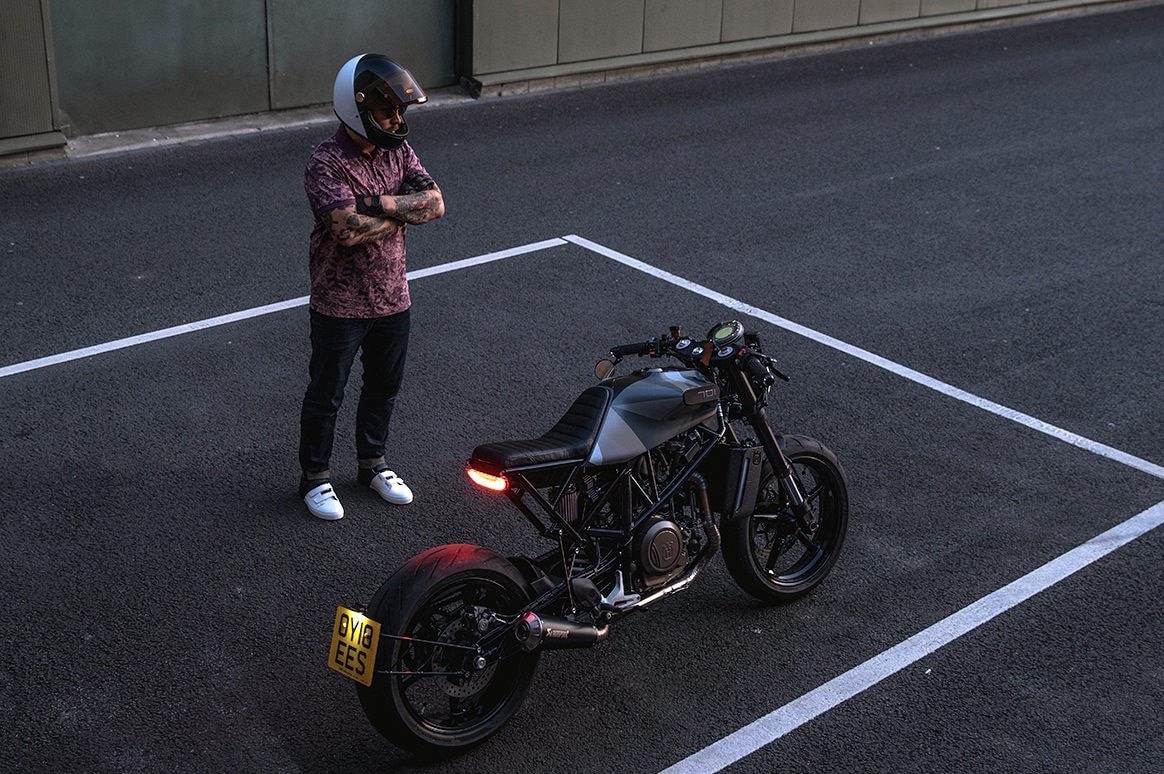 “Not every build is, or can be, precision engineering, hardcore different, innovative or expensive,” he explains. “It depends on customer budgets, inspiration, time and availability.”

“But for us, a custom bike should always be unique, bold and outspoken. The first time you see it online or in the flesh it must blow you away. Only then should rideability, ergonomics, road legality or comfort kick in.” 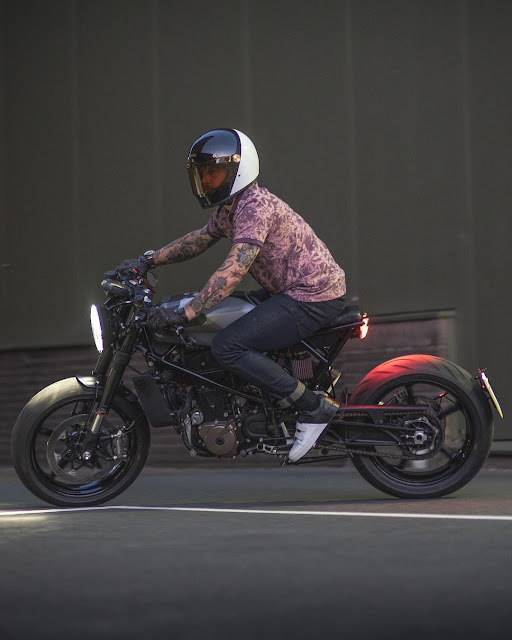 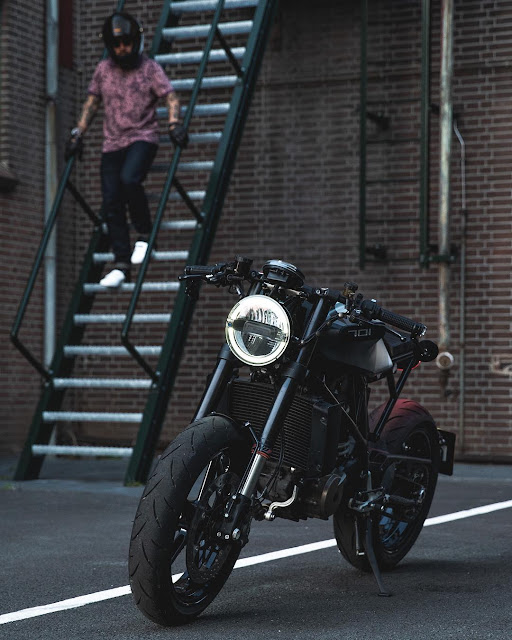 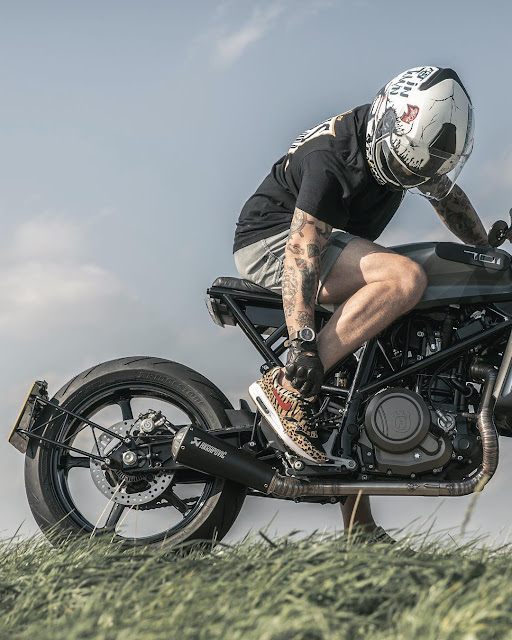